This is dedicated to my Grandfather. The world’s greatest cowboy, rancher, grandfather, father, husband and friend. Without him, his love and support I wouldn’t be half the person I am now.

Everything I need to know I learned from my Grandfather
Milo E. Wilson Jr.
1919-2004

There are not enough hours in the day to relive all the wonderful memories, good times, and stories he had to tell. His life story was the making of a best seller Louis L’Amour book, his love for his wife a hundred country songs, and his honor as a man countless cowboy poems. Milo was an amazing man…with his gentle manner and twinkly eyes you just knew there was something special about him. He was down to earth, modest to a fault, friendly, and always had a hug, kiss, or pat on the back for you anytime he saw you. Some of the things I’ve learned about my grandfather and the truths he taught me about the real world:

• He didn’t fancy labels or titles, his family called him Milo , and his buddies called him Wilson.
• He liked the finer things in life such as smoked oysters, a good prime rib, and three fingers of whiskey in his glass.
• There was never a problem too big a peppermint lifesaver or tic tac couldn’t cure.
• There really is such a thing as true love.
• Real cowboys know how to waltz, take their hats off when they dance, and always stand up when a lady enters the room.
• He loved to go for a drive…anywhere, anytime..and that’s when you received history lessons that you’ll never read about 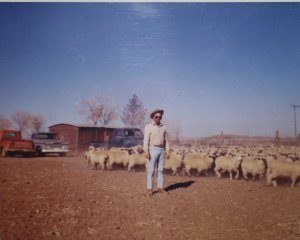 in a book.
• He taught me to always bet on the gray horse.
• I learned to play gin rummy before I knew how to count.
• He never talked to be talking, well unless he had just a useful little bit of trivia to share.
• Respect is earned.
• Brownies were made to hold up the chocolate frosting, and potatoes were created to hold up the gravy.
• The surest way to get on Milo ‘s bad side was to eat the corners out of the brownie pan (that’s where the most frosting was).
• It took more than a good tee off to beat him at golf, and the Canadian geese on the green really didn’t care that they’re sitting on your golf balls.
• I learned respect for the land.
• He taught me that you take care of your family even if it means swallowing your pride or your hurt feelings.
• It’s not what you are in life; it’s who you are.
• Some things in life you don’t skimp on just to save a few cents, such as good work gloves, soda pop, or cheese in a can.
• The best things in life aren’t things.
• You can always find a story and a friend in the face of a stranger.
• You’re only as good as your word.
• I learned he remembered not the times I’d failed, but all the good things I’d done and the person I had become.
• When you’re as smart as Milo was, it’s ok to do the crossword puzzle in pen.
• He taught me a man’s worth is not measured in gold or silver, but in the family and friends he has.
• That I am my mother’s daughter.
• And that no matter how much you’ve prepared yourself to say goodbye, you never are ready to let go. 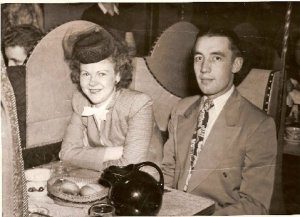 my grandmother Ann, or at least hear stories of the love affair of the century that all started with that kiss in second grade. To ease our own grief, we believe that my grandmother has spent the last 5 ½ years getting things ready, preparing Heaven, and finally decided it was time for him to come home.

In honor of their memory:

The cowboy strode up and mounted his horse,
and turned his tired head toward the hills.
He didn’t feel the wind, nor notice the cold,
he’d many times suffered worse ills.

He rode and he dreamed of a time long ago,
before he was left all alone.
The Colorado * sun shone and the flowers all bloomed,
but that was before she was gone.

He closed his eyes as he rode and could feel her touch,
just the way that it all used to be.
Now he’s riding alone, to find her again,
together once more, he and she.

He bode no ill, but he couldn’t stay here,
away from the one that he loved.
He had family and friends that would miss him he knew,
but he needed her love from above.

The weather got worse; it got harder to move,
but he knew that he must stay astride.
His longing for her welled up in his soul,
and he knew that this was his last ride.

He spurred his horse on and picked up the pace,
for he felt that his time was now near.
He whispered her name as he galloped along,
and he knew that somehow she would hear.

She opened her eyes and looked down from the sky,
and she smiled when she saw it was him.
She couldn’t see his face, but she knew who it was,
by the shape of his beat up hat brim.

She reached out her hand and she grabbed hold of his,
and she helped him to sit by her side.
With a smile on his face and her love in his heart,
the cowboy completed his last* ride.

• ‘Last’ was not in original poem