When I was about 12 or 13 (which would have been around 1985), my brother, who was active Army, sent me a bracelet for my birthday. At the time, I didn’t quite understand the significance of it, but I wore it every day. As I got older, I started doing research and found that Charles H. Meldahl went missing on October 20, 1968, and was considered MIA. Every day I wore the bracelet with his name on it. I wore the bracelet until it was no longer shiny red. I wore it until probably 2000, and then one day, couldn’t find it anymore. Until today. As I was unpacking boxes that have been boxed up for a decade or more, cleaning out my garage in hopes to regain my sanity AND to start preparing to move, it was tucked away with some fire service mementos.

So, I came into the office to find out the status of SSG Meldahl. Cue tears. His remains were recovered February 14, 1995 and identified March 18, 2001. I only wish I’d known that his remains had been returned on 6/6/2001  because just a few weeks later, I was actually in Washington D.C. and could have left his bracelet at the Wall.  There’s very little left to say, except welcome home soldier – thank you for your service. You and your fellow soldiers will never be forgotten. May you, and your comrades, rest in peace.

I’ve included the details about SSG Meldhal below. His entire team has since been found and their remains identified and returned. 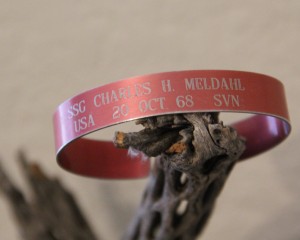 REMARKS:
SYNOPSIS: On October 20, 1968, CW3 Deitsch, aircraft commander; WO1 Knight,
pilot; SP5 Meldahl, crewchief; SP4 Bridges, flight engineer; and SP4
Stanton, door gunner, departed Dong Ba Thien Airfield, South Vietnam, in a
CH47A helicopter (serial #66-19053) on a resupply mission to Ban Me Thuot,
South Vietnam.
The CH47 “Chinook” helicopter was one of the workhorses of the Army’s air
fleet. As a cargo lift, the Chinook could carry up to 28,000 pounds on its
external cargo hook, and is credited with the recovery of 11,500 disabled
aircraft worth more than $3 billion. As troop carrier, the aircraft could be
fitted with 24 litters for medical evacuation, or carry 33-44 troops in
addition to the crew. On one occasion, a Chinook evacuated 147 refugees and
their possessions on a single flight. The Chinook could be outfitted for
bombing missions, dropping tear gas or napalm in locations fixed wing
aircraft could not reach. The big bird could carry a large cargo of
supplies.
Deitsch radioed at 0700 hours on October 20 that his aircraft was over the
Ninh Hoa Valley. That was the last anyone heard of the CH47. At about 0800
hours, it was determined that the helicopter was overdue.
An intensive search effort was made, but no wreckage was ever found of the
CH47, and search efforts were concluded on October 28. Villagers were later
canvassed throughout the Ninh Ho Valley, and literature was distributed
asking about the crash of the Chinook, but no new information was ever
discovered.
=======================
Subject: SSG Jerry Glen Bridges
Date: Tue, 12 Jun 2001 01:02:07 EDT
From: JJffdvs@aol.com
Between 1984 and 1994,Vietnamese residents and refugees offered information
and material evidence potentially linked with the crash. In 1994, the crash
site was located and in 1995, during the 33rd Joint Field Activity, the site
was excavated, yielding additional information. In October 2000, the
investigation was completed and it determined that all members of the crew
went down with the helicopter and did not survive the crash. SSG Jerry Glen
Bridges remains have since been returned home. On June 10,2001 SSG Jerry
Glen Bridges was finally layed to rest where he belongs in Giles County
Memory Gardens. Home at last.